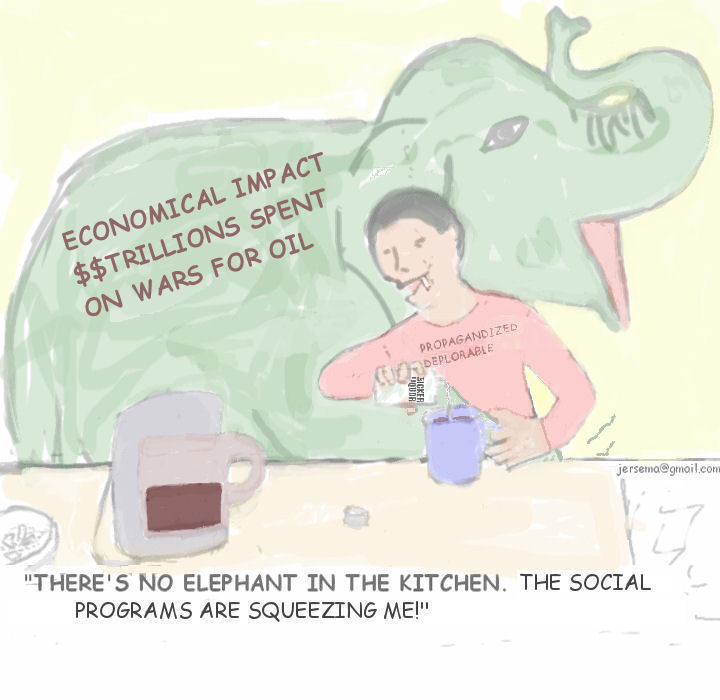 The wars for oil are stressing the US economy, but many think it is the social programs that are lowering the standard of living for the rest of us, programs such as helping the refugees displaced by the wars for oil. Many are not seeing the elephant in the room, so to speak.

Terrorism is a two-headed monster. I see the actions of others as terrorism, but am unable to look upon my operations, bombings and drone strikes in that light, although certainly the victims see it that way.

That was a figure of speech. Actually I have another idea entirely. On the home front we need to learn to get along without foreign oil. Fracking and pipelines are not the answer either. Electric powered vehicles,  public transportation, eating what is in season and grows in my own locale, working close to home and living close to my job, living in a self-sufficient intentional community, growing and making things for my neighbors, letting them grow and make things for me, are all part of the first part of the solution to the high cost of war for oil.

The second part of the solution is to support girls and women everywhere. No more child marriage, no more genital mutilation, no more rape, no more “honor” killing. The countries on President Trump’s controversial travel ban list have laws against those things, but they are not well enforced. We must promote education for all, particularly girls; help make divorce accessible to girls and women who want out; and, yes, make reproductive choices available, with all the modern methods of contraception. When dealing with a population suffering from gender suppression especially, all methods must be available. This will change the world, and will require some brave people to implement it. Instead of supporting the oil companies taking the oil, the military and contractors can build and support schools, women’s shelters, child protective services, medical and legal clinics. The hardliners won’t like this, but many others will welcome it.

Respecting another culture does not mean turning a deaf ear to the cries of children and women. There is no justification for abuse. The hardliners claim that Muhammad (peace upon Him) consummated a marriage with a 9-year-old. If that were true, why did Aisha never conceive? The Holy Prophet did not force an unwilling girl, of that I am sure.

Well meaning parents in these and other countries arrange marriages for their girls in order to protect them from being raped. Yet many of these girls endure brutal rapes, that go on for the rest of their lives, when the marriage is consummated. The point about rape is a legitimate concern as the crime is rampant in these countries. Rapes must be successfully prosecuted! The legal system is too soft on men and boys who commit crimes against girls and women! This has to change!

It is not being culturally insensitive to insist that crimes be punished. If we, the US, are going to occupy a country this should be high priority, not appropriating the resources.

This is a text widget, which allows you to add text or HTML to your sidebar. You can use them to display text, links, images, HTML, or a combination of these. Edit them in the Widget section of the Customizer.
Loading Comments...
Comment
×
%d bloggers like this: